It Takes Just One Person to Change This Lightbulb

Q: How many cops does it take to screw in a light bulb?

A: None. It turns itself in.

You’ve probably already heard your fair share of lightbulb jokes, so I won’t try to entertain (or bore) you with any more. Instead, I’m going to tell you about something that will probably put an end to all of those jokes once and for all. 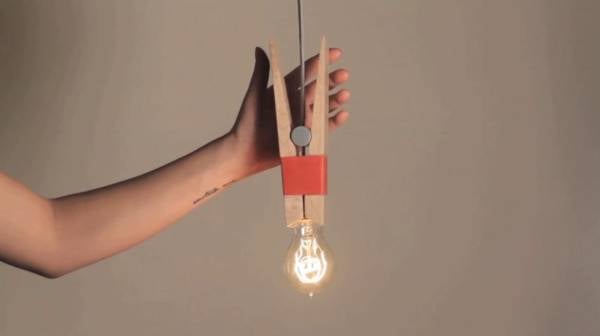 Say hello to Peg, the clothespin lightbulb, Steffi Min’s industrial design senior thesis that puts a whole new spin on how people fasten lightbulbs. There’s no screwing around with her project. Just squeeze the pin open, remove the old bulb, put a new one right in, and you’re off.

The inside portion of the giant-sized clothespin actually has electrical contacts built in that transfer electricity to the bulb ones it’s pinned into place.

Since it’s only Steffi’s thesis, you won’t find any of these in stores anytime soon. Unless, of course, some people take notice.

[via Gadget Review via Oh Gizmo!]