Who Are You? What is That? What’s That? Oooh, Portal 2 Personality Cores!

With the foundation set by the original game, Portal 2 entertains fans not just by providing them with more puzzles to solve, but also by building on its mythos, and that involves fleshing out characters and creating new and memorable ones. Valve clearly spent a lot of time making sure that these characters are endearing, but for some reason they refuse to cash in on these characters. Until then, we’ll have to be content with fan-made creations, like these miniature Personality Cores made by Chris Myles. 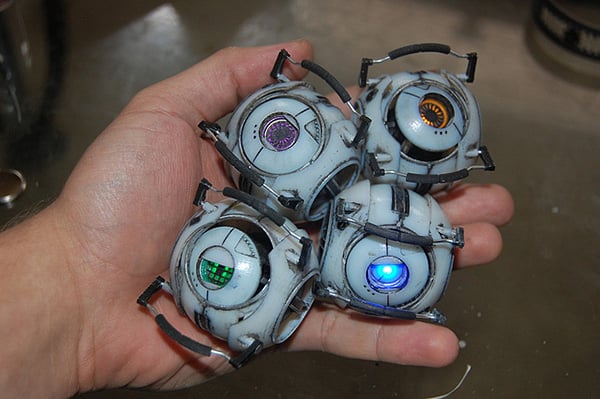 Myles made “fully functional” versions of the Intelligence Dampening Core aka Wheatley, the Adventure Core aka Rick, the Space Core and the Fact Core. But don’t get your hopes up – none of these Cores speak, much less retain their quirks and personalities. But they do have movable parts and LED eyes.

Unfortunately, Myles says he won’t be making more nor will he sell these Cores, the latter for obvious reasons. Check out his Flickr page for more pictures of the Cores and his other geeky creations, including this Hello Kitty Core that may or may not infuriate Portal fans. Come on Valve, merch like this will sell like TF2 hats. Throw your fans a bone and earn yourself billions in the process.