I want to start this off by saying, BWAHAHAHAHA. As the story here goes, the police in Hampshire over in the UK were called by a concerned citizen with a startling report. A white tiger had apparently been spotted hiding in a field near a local golf course eyeing a quick bite of golfer for lunch. Naturally, the police responded. 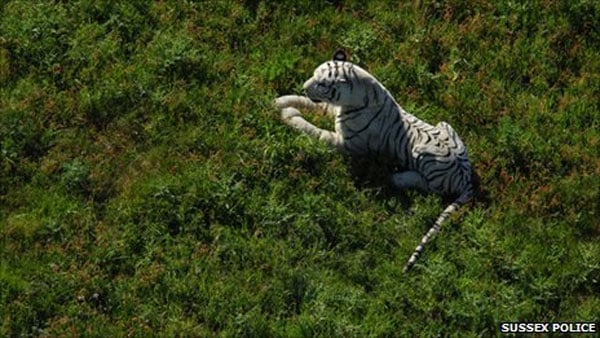 They called the zoo, rounded up a team with tranquilizer guns, and sent them out in a helicopter to keep them from being eaten by sending them on foot. As the police neared the beast it likely sat quite still and didn’t care that the helicopter was hovering nearby and a shooter was taking aim. The reason said tiger was so meh about the copter soon became apparent when the tiger blew over thanks to the wind created by the helicopter.

Yep, the tiger that caused all the ruckus was a stuffed toy. Let me say again, BWAHAHAHAHAHAHA. I would have thought that upon receiving a report of a tiger on the loose the police would have done two things. Number one, someone would have at least used some binoculars to peep the tiger ahead of mounting a aerial assault on the beast. Number two, could the zookeepers not have ran over to the tiger cage and took a head count. Seriously, the stripes aren’t that confusing. The police are now searching for the owner of the stuffed toy. I wonder if they are using the helicopter to look for him.