There are many things to like about Apple’s iPad, but its rear-facing speaker isn’t one of them. I’m not talking about how they’re weak and tinny since most mobile devices have below average speakers anyway. It’s that the sound is directed away from the user’s ears. Not only that, but their placement means it can be quite easy to unintentionally block the grill while you’re holding the tablet. That’s why Matthew McLachlan came up with the SoundJaw. 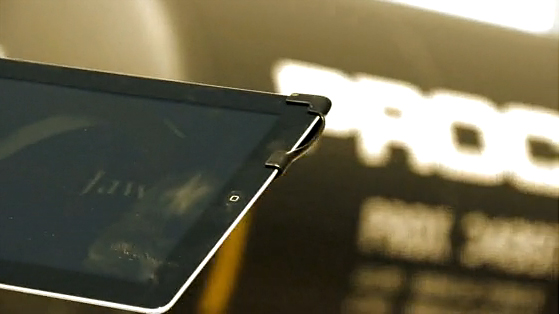 The SoundJaw is a piece of plastic that clips on to the side of the iPad or iPad 2, and redirects the sound coming from the speakers to the front. It’s simple but effective. I wish I could say the same about McLachlan’s Kickstarter video:

A simple background and a couple of demonstrations would have been enough. The iPad as boombox scene was particularly cringe-inducing. But that doesn’t change the fact that the SoundJaw could be useful to many iPad users. If you’d like the SoundJaw to go into production, pledge some money on its Kickstarter page. And ask McLachlan for a better video. A minimum $20 pledge gets you one of the first SoundJaws.