I used to know a guy whose lifelong dream was to go to Africa and go on a safari to see the animals. I always thought the dude was crazy; I am not going anywhere that has animals that can eat me. Photographer Roger de la Harpe lacks the same reservations about Africa that I have and he took his wife and niece to Africa with him to shoot photos of lions for a book on endangered species. 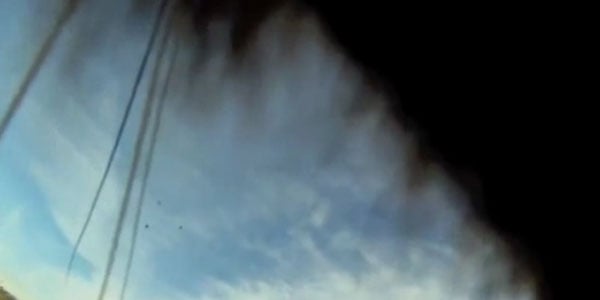 While rolling around in the Tswalu Kalahari Game Reserve in South Africa he spied some lionesses in the path ahead. If it were me, I would have put it in reverse and left fearing the evil lionesses would bite the tires off the truck and wait until dark to come back and eat me feet- first. Ole’ Roger instead climbed out of the truck, left a camera in the path, and ran away to see what he could record.

The lionesses strolled up to the camera, licked it a few times and then tried to eat it. When the thing didn’t just crunch up one of the lionesses carried the camera off. The image you see above is the view from the lion’s mouth, and below is the actual video captured when the lions took the camera for a stroll:

I bet that lion was licking the human residue off the camera. Roger then crept back into the brush and retrieved the camcorder after the lion left it. Apparently, the lions were only 75 meters away when he went to get the camera back.