Any child of the 80’s has owned a Rubik’s Cube at some point. The puzzle was all the rage back in the day and I can still recall when the kid that could solve it really fast ended up on the show That’s Incredible. I never knew there was trick to solving the cube; I always resorted to tearing the stickers off to match the colors up. 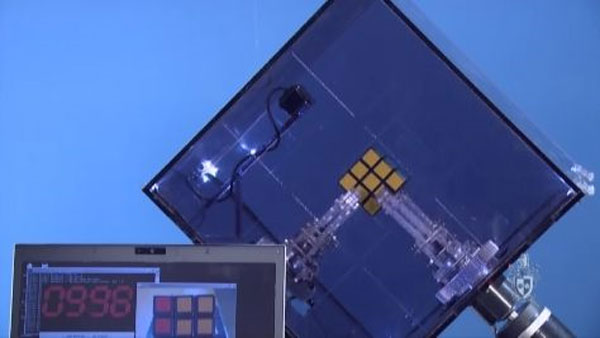 Some college students at the Swinburne University of Technology including David and Richard Bain, Daniel Purvis, Jarrod Boyes, Miriam Parkinson and Jonathan Goldwasser built a robot for their engineering project called Ruby. Ruby is able to solve that Rubik’s Cube much faster than I ever could.

The bot solved the puzzle in just over 10 seconds. It is able to solve the puzzle by scanning each face of the cube and then it uses a software algorithm to solve the puzzle. The scanning process is very fast since it can scan, identify the solution, and solve in less than 11 seconds. While Ruby is the fastest documented cube-solving robot, the fastest human time for solving the cube is 6.24 seconds so Ruby still needs some improvements to beat that.