Robots Juggle Way Better Than I Can

I have tried to juggle before, I simply can’t do it. I don’t know why, but I am not able to get the balls into the air high enough to catch them without everything hitting the floor. I can’t see how some people can juggle things like bowling balls and knives. I would cut off a finger or crush my foot. Now robots can even juggle, and two robots have surfaced that use very different tech to accomplish it. 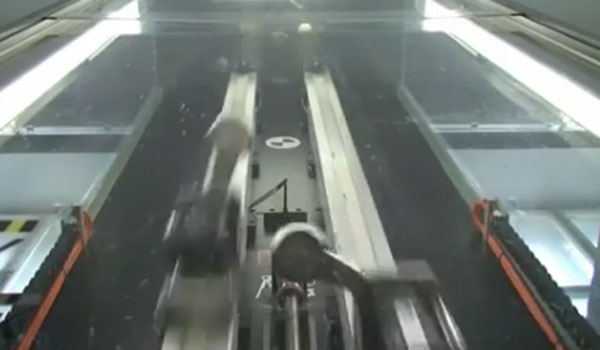 The first ‘bot you see in the video below is servo driven and has high-speed cameras that help it to tweak the trajectory of the balls. It moves up and down the tracks while juggling five different balls. The robot is very loud, but it is cool how fast and accurate it is at juggling though. It was created by a team of master’s degree students from the Czech Technical University in Prague.

The other robot is much simpler than the first. The second ‘bot needs no cameras and only juggles one ball. The ball is actually more like a bead and I am not sure you can call it juggling with only one ball. Still the robot is cool because it uses a pendulum technique. Check out the video below to see the thing in action.