Prop maker/Flickr member/likely Aperture Science engineer Chris Myles – who also made these Portal 2 Personality Cores – has brought Cave Johnson’s absurd metaphor to life, although the Aperture Science CEO will be disappointed when he finds out that these grenades are not only made of fake lemons, they’re also not lethal. 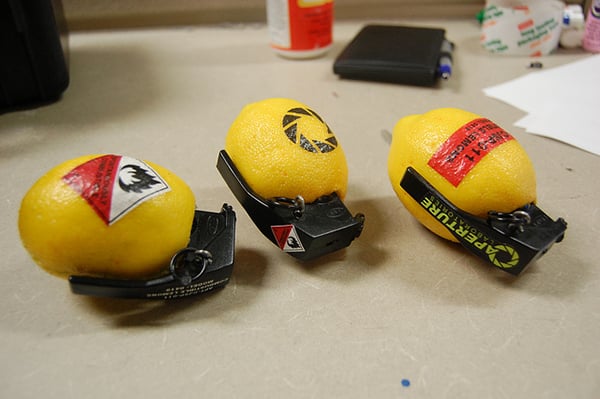 Instead of fragments, chemicals or explosives, the grenades supposedly blast out a recording of Johnson’s lemon rant followed by an explosion sound effect. Here’s Myles’ description of his work: Tops from some old airsoft bb loaders, random springs to make the spoons fly off when you pull the pins, some paper plus modge podge labels, and a hacked greeting card so when the spoon comes off Cave does his rant and then a big BOOOM.

If you want a wearable version of the combustible lemons, check out this pendant by jeweler Mark Wengryn. We’re done here.