I’ve only been in one Apple Store; they aren’t that prolific in my area. The one in Austin, Texas isn’t fancy and I don’t really recall much about it other than it has a lot of MacBooks and geeks running around. Last month Apple celebrated the 10th anniversary of the opening of its first retail store. 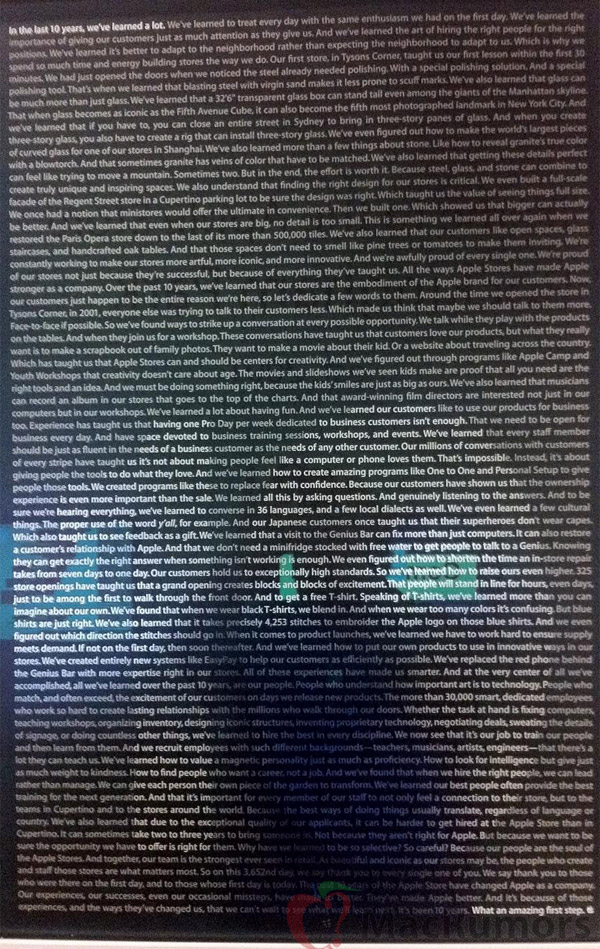 The only thing it really changed to celebrate that anniversary was to move to iPads for the signs in its stores. It did ship out a big poster that was put in the back for workers to read talking about what we it has learned over the years. Some of the stuff is pretty interesting and talks about little things I have never thought of. One of the strange little things was the mention of the metal façade of the building and how to keep it clean:

“Our first store, in Tysons Corner, taught us our first lesson within the first 30 minutes. We had just opened the doors when we noticed the steel already needed polishing. With a special polishing solution. And a special polishing tool. That’s when we learned that blasting steel with virgin sand makes it less prone to scuff marks.

Another fun bit of trivia is about their employee’s t-shirts:

“We’ve found that when we wear black T-shirts, we blend in. And when we wear too many colors it’s confusing. But blue shirts are just right. We’ve also learned that it takes precisely 4,253 stitches to embroider the Apple logo on those blue shirts. And we even figured out which direction the stitches should go in. “

If you want to know what the whole posters says hit the source link below to check it out.