Transferring files to and from iOS devices isn’t as simple as it should be. Instead of having it recognized by computers as a storage device for easy file handling, we have to use an intermediary program, either syncing via iTunes or a program like DropBox. Instead of a USB port, we get a 30-pin connector. The lack of a file manager is also disappointing. That’s why I’m really interested in PhotoFast’s i-FlashDrive. 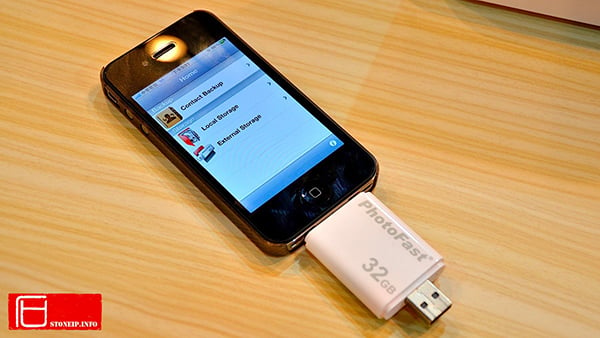 The i-FlashDrive is a USB disk with a 30-pin connector, so you can plug it into a computer, transfer files to it like a normal USB drive, and then shuffle files between it and any iOS device. But what really puts the “i” in i-FlashDrive is the complementary app, which has a decent file managing interface. You can copy, create new folders, text or voice recordings and even play media files from within the app. You can also back up your contacts to and restore from the i-FlashDrive.

The device isn’t without its drawbacks though. For one, it’s a bit too chunky and will surely block other USB ports when its plugged in to a computer. I’m sure some people will also find other roundabout ways to transfer files, but that’s because those people work and live in areas with Wi-Fi or speedy mobile connections.

As someone who doesn’t have wireless access to the Internet at all times, I’m all for the PhotoFast. The additional storage it provides means I can easily play songs (and hopefully watch videos) without filling up my iPhone and more importantly without dealing with the sluggish mess that is iTunes. The PhotoFast will be available in the US this July, with capacities ranging from 4GB to 32GB, and prices from $95 (USD) to $180.

[via stoneip (CH) via TUAW]