The old PS3 models occasionally had a problem with overheating, so when modder and PS3HAX administrator Pirate decided to make his second PS3 laptop mod, he decided to install a liquid-cooling system to ensure that it won’t be fried. The result? A portable PS3 that can go for 48 hours straight without breaking a sweat. 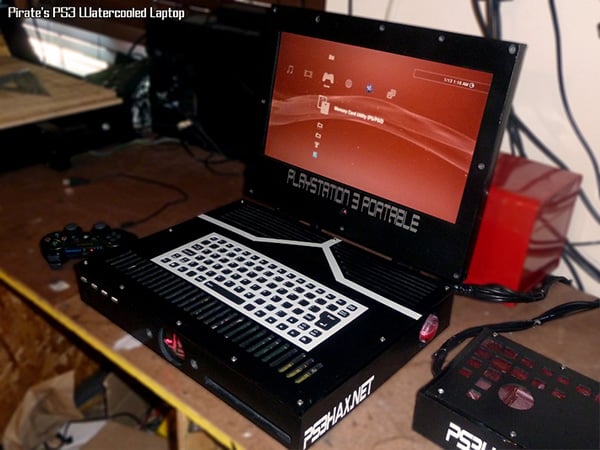 You might be wondering why Pirate used an old PS3 SKU instead of one of the newer Slim models. That’s because the PS3 Slim wasn’t around when Pirate started this project way back in 2008. Ben Heck must have made a ton of PS3 laptops in between now and then, but then again none of them are liquid cooled. Speaking of which, Pirate used Feser One Cooling Fluid in this project. Other specs include a 720p/1080i screen (not sure if it’s 15″ or 17″), 4 USB ports, 500GB HDD, and built-in keyboard and speakers. Unfortunately the PSU is separate from the main unit, so minus points for portability there…

… Not that that prevented Pirate from making a tidy sum of money out of his creation – the winning bid on eBay was $2,000 (USD). Although if you think of it, after putting in three years of blood, sweat and tears into the laptop, $2,000 sounds just about right. Check out PS3HAX and Pirate’s work log for more info.