There are hobbyists, and then there are people like Nic Case. His obsession with remote-controlled toy cars has led him to create the Schumacher Mi3, a record-breaking toy car that can easily outrace even the one you have in your garage. Its top speed? 161.76 mph. 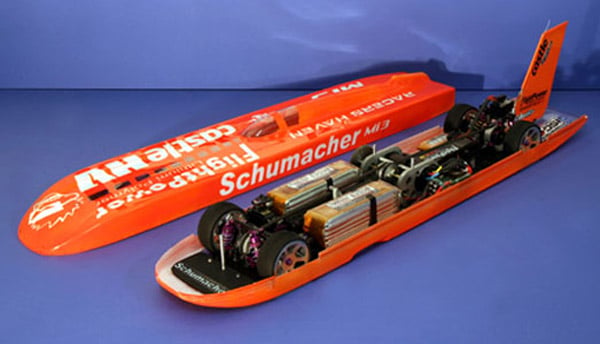 Case spent six months and over $4,000 (USD) building the Schumacher Mi3. It has a carbon fiber chassis, an 11hp motor and a 12-cell battery pack. Here’s the Schumacher Mi3’s record-setting run at the Rockingham Dragway:

Wow. I wonder if the guy driving it can actually steer that thing it or even see it. I wouldn’t be surprised if the remote only had two buttons, one to stop and one to go. As you’d expect from someone as driven as he is, Case is already looking forward. He’s been working on the Streamliner, a toy car that he wants to have a top speed of 200mph.