If they ever remake that old Tom Cruise flick The Color of Money where he was a pool shark, but in the distant future after the robots take over, this ‘bot is the one that should play Cruise’s character. The robot is a humanoid design that is able to play pool on a full size table using both hands. The builder of the bot is Thomas Nierhoff. 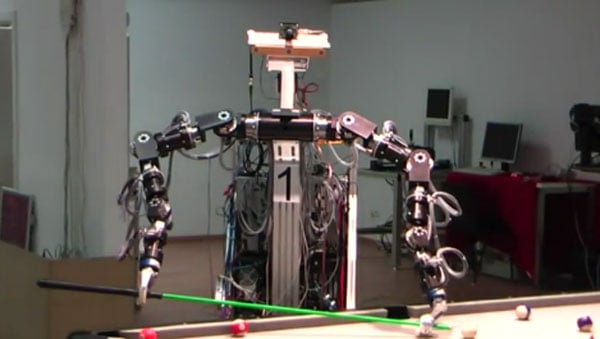 Each arm the robot has offers 7-degrees of freedom and can sink easier shots with up to an 80% success rate. That is much better than my own success rate; I am not good at pool. Nierhoff apparently created the robot for his master’s thesis at the Institute of Automatic Control Engineering at the Technical University of Munchen in Germany.

The video above shows the robot nailing five balls in a row. The video also shows some of the times the bot misses a shot too. As the shots got more difficult, the robot didn’t perform nearly as well with 30% of the hard shots being successful.