Back in the early days of arcade games, I always enjoyed those early top-down racing and skiing games with the jaggy pixelated course that you had to steer through. Now a few 21st century geeks have come up with their own take on the classic arcade racing genre with Receipt Racer. 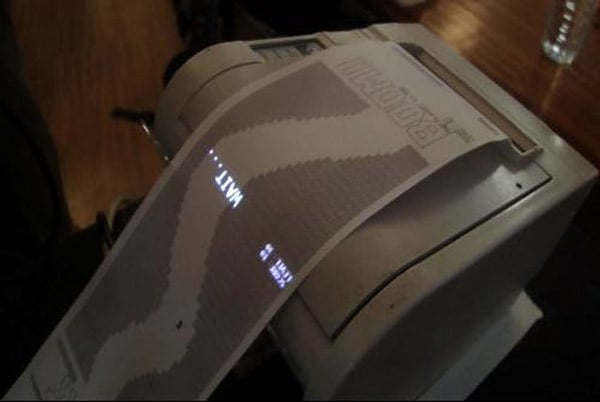 The game uses a dot-matrix receipt printer, hacked to continuously print out a road, while a player uses a controller to keep a light beam (representing the car) in the center of the course. One wrong move, and the printer stops. Of course if you run out of the 50-meter roll of paper, it’s Game Over too.

Joshua Noble, Martin Fuchs, and Philip Whitfield (aka “undef”) built the game as part of the CreativeApplications.Net workshop at Barcelona’s digital culture OFFF festival. There’s a web-based version of the game over at undef’s website, but it’s not nearly as cool as the printer-based version in the video above. Of course, the game does seem just a little wasteful, with all the paper and ink that it consumes. I wonder what other games could be reproduced this way – pretty much any top-down or side-scroller with obstacles could work

[via Nerdcore via Neatorama]