Here’s something fun for iPhone, iPad and iPod Touch users to look forward to this holiday season. The guys from Japan’s Kyosho – one of the leading makers of radio-controlled model vehicles – are working on an iOS-compatible helicopter. 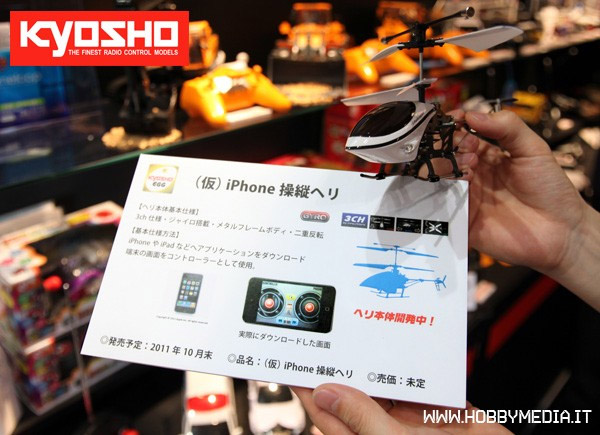 Shown at the Tokyo Toy Show in prototype form, the pint-sized helicopter will be controlled with a custom iOS app. The app will provide coaxial command of the chopper, but it’s not clear if it will achieve this over WiFi, Bluetooth, or require some sort of RF dongle for controlling vehicles. While you can already control the Parrot’s AR.Drone with an iPhone app, it’ll be nice to see some other R/C vehicles that can do the same.

Kyosho plans on releasing the iOS-compatible helicopter around October 2011, but didn’t reveal pricing as of yet. Hopefully, they’ll start offering other vehicles you can control with your iPhone, iPad or iPod Touch too. I’m looking forward to the day when all R/C vehicles can accept WiFi signals, so you could build custom control apps on pretty much any mobile device on the market today.