I don’t know how much power this prototype t-shirt from Orange can generate from sound, but it may well end any energy crisis on the planet. All we need to do is hook this shirt to the grid anywhere near my wife and daughter and the non-stop talking will short something out from excess power. Supposedly, you can connect your mobile phone to the shirt’s charger and then sound will recharge your phone. 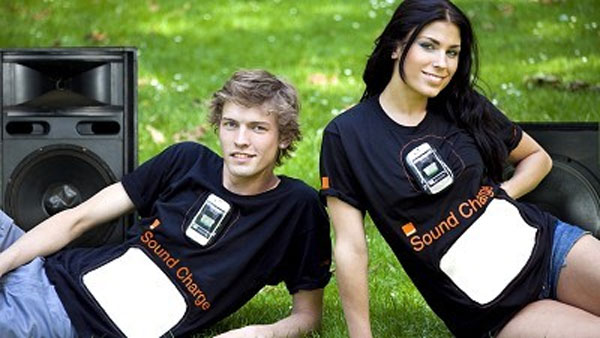 The shirt uses tech that harnesses sound vibrations, particularly those from bass, to recharge your device. The electricity is generated by moving the t-shirt’s piezoelectric film. I would like to know how much power the shirt can generate.

Exactly how the shirt stores and transfers energy and and what devices it can charge are unknown at this time. What I do know is that the prototype shirts in the photo look really dumb. The shirt charger is being tested at a music festival at Glastonbury in the UK.