How Huge Is That Folder You’re Trying to Drag? The DataBot Mouse Will Let You Know

My hard drive is filled with so much junk that sometimes I wonder how on earth it still manages to turn itself on without conking out. (But I’m glad it still functions well though, despite that. Not working at its best, but I’ll take that until I can start deleting stuff after making backup copies.) 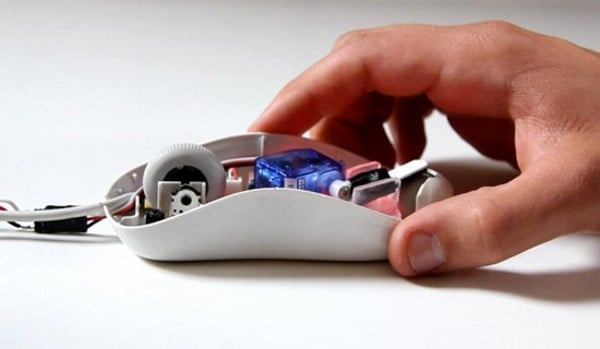 Anyway, I’ve begun transferring some of these files via USB to my laptop, which has been a slow and arduous process thus far. What I do is right-click on the folder, check the size, and see if it will fit into the USB drive or not. Jan Barth and Roman Grasy’s DataBot concept mouse can’t really tell you the size of that file or folder, but what it does is let you feel how huge that folder is by making it harder for you to move the mouse, along with vibration feedback.

In order to work, the DataBot mouse adds a rolling ball and a servo-motor to a modern optical mouse, which seems sort of like a step backwards.

[via Engadget via Dvice]