Green Siemens Airplane is the Chevy Volt of Aviation

I have always wanted to learn to fly, since aviation is an interest of mine. It’s been very interesting over the last few years to see the giant push for green vehicles in the automotive sector spill over into aviation. Sure, it’s nice that these green planes can reduce pollution, but for the most part reducing fuel needed in commercial and military flights saves money on expensive aviation fuel. 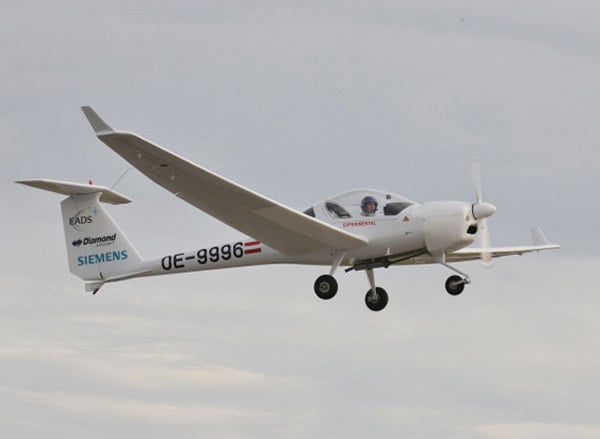 Siemens has teamed up with a couple other companies including EADS and Diamond Aircraft to build the cool hybrid electric plane you see in this photo. The aircraft is called the DA36 E-Star and it’s design is based on the powered glider made by Diamond Aircraft called the HK Super Dimona. The battery packs the hybrid plane uses are from EADS and Siemens provided the other tech for the plane.

The aircraft has a 70kW electric motor from Siemens that drives the propeller. Similar to the Chevy Volt, battery packs that hook to the motor can be charged by a Wankel combustion engine to keep the plane in the air. The electric system can be scaled for use in larger commercial planes too and promises to save 25% in fuel consumption. That means less pollution and lower flight costs.