It never ceases to amaze me when we go somewhere just how much stuff my wife has to take with her. I can get a Walmart bag and pack all I need to get by for a week inside the thing. My wife, on the other hand has one of those giant suitcases that we could use to smuggle our kids onto a plane. A bunch of the room is usually taken up by her makeup. 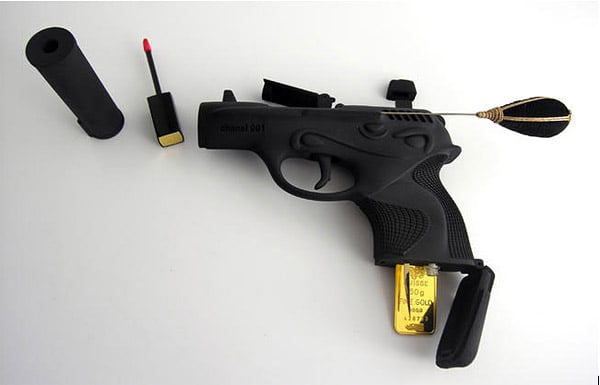 These faux gun makeup bags also have an antique hairpin, USB stick, gold toothpick, a barrel full of pills (including Viagra), and a spot for a 100g silver bullion in the “cheap” version and a 50g 24k gold bar in the top-of-the-line model. Why you would need to carry a gold bar with you, I don’t know. It appears that the perfume comes out the barrel when you squeeze that little bulb. 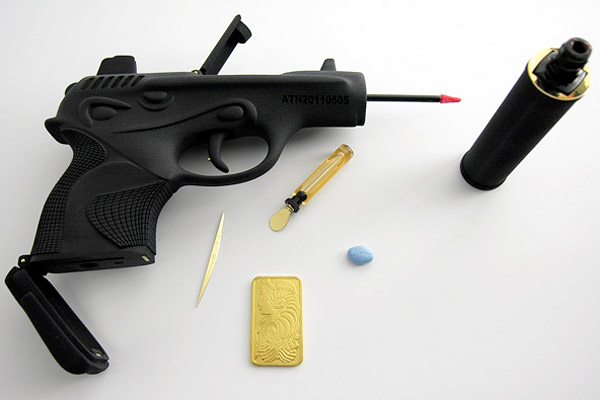 There are two versions, a white Dior 001 version that costs about $11,500 (USD), and a black Chanel version that will cost you $17,000. Both of them have branded cosmetics inside like lip gloss and perfume. (In)conveniently, the cosmetics can only be filled at the gallery of the designer, Dutchman Ted Noten.

I get that makeup is a big deal for some women, but I can’t imagine spending $17,000 on a makeup compact that looks like a gun. First off, this thing would get you shot in some areas, and you will certainly find yourself in the company of a TSA agent doing a cavity search at the airport if you try to fly with this thing in your bag.