Table Tennis for One?

When you think about it, ping pong is kind of a silly game to begin with. You know, a couple of grown adults smacking a tiny hollow ball across a tabletop with all their might does seem a bit superfluous. But take away your opponent, and it’s not a game at all, right? Well, not if you head over to Japan and buy this new version of the game from Happinet [JP]. 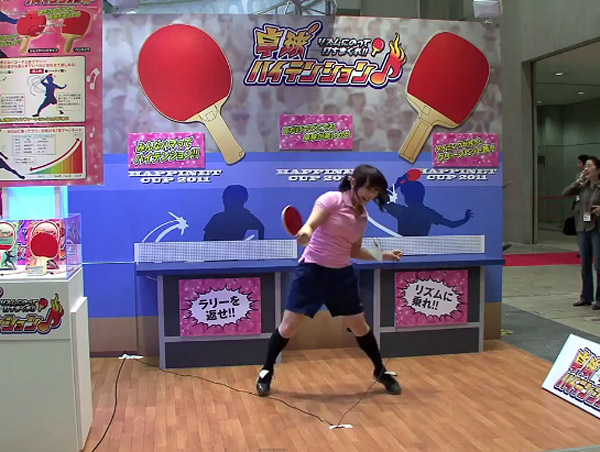 The “Hyper Ping Pong” table tennis game does away with all those pesky balls, tables, and opponents, replacing them with a single paddle for one player. As the player swings the ping pong paddle around, it outputs realistic sounds to simulate a rally with a non-existent Player Two. You need to listen for the sound and speed of the ball to time your returns properly. A motion sensor in the paddle then detects whether or not you “hit” the non-existent ball. Here, check out the silliness in action:

Well, that sure looks like fun for at least 2 minutes. And what was the deal with that guy’s red shoes? I suppose if you don’t already own a Wii, Kinect or PlayStation Move, it’s a way for you to play some solo games, but frankly it just looks ridiculous. If you really must have one, you’ll need to wait until October, at which point it will go on sale for ¥1980 (~$24 USD). Or you could just buy a couple of real paddles, an actual ball, and play with another human being.