In South Korea, there’s a new way to go shopping, and it doesn’t involve going to the store, or surfing the web. Instead, customers of Tesco’s Home plus stores get to shop in the subway station before they get home. 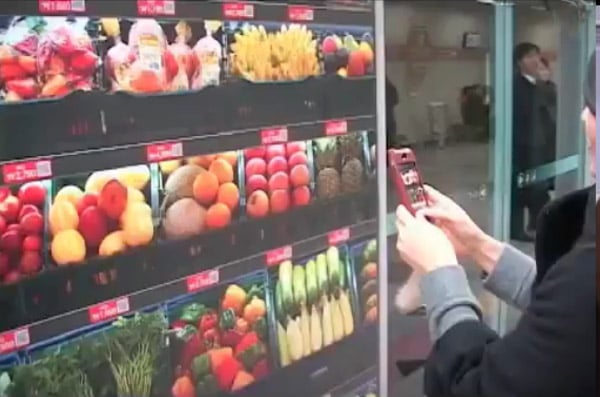 The system works like this: Images of numerous items are postered on walls in the subway station, merchandized just like they are at the physical store. Each image is accompanied by a QR code of the products. Users shop the “aisles” of the subway store, selecting items with their smartphone camera. Once all items are picked, quantities selected, and placed in the electronic cart, shoppers simply check out, and shortly after they get home from their train ride, the items are delivered to their homes.

Clever, no? It’s sort of like a new spin on a service like Peapod, or the long-defunct, but much-beloved Kozmo. The whole instant gratification delivery model has always intrigued me as a consumer, but as Kozmo proved, it’s also costly to operate at a profit.

Still, with one-in-five South Koreans owning a smartphone, and not all of them living near one of the few Tesco Home plus stores, this is a great opportunity for them to expand their market, and for consumer convenience. I can’t tell you how much time I’ve wasted waiting for the train to arrive, and wishing I could use the time more productively. I hope to see something like this here in the U.S. sometime soon.

[via KoreAm via My Modern Met]