Lego Robot Can Serve Up Pancakes in Whatever Shape You Want

Last year, we were mesmerized with the pancake flipping robot arm; now it’s time to meet the robot that can actually cook up some mean pancakes. Now here’s more gadgetry that can add to the existing fanfare on the train of thought that robots would someday come to rule our human world: the pancake-making robot constructed from Lego. 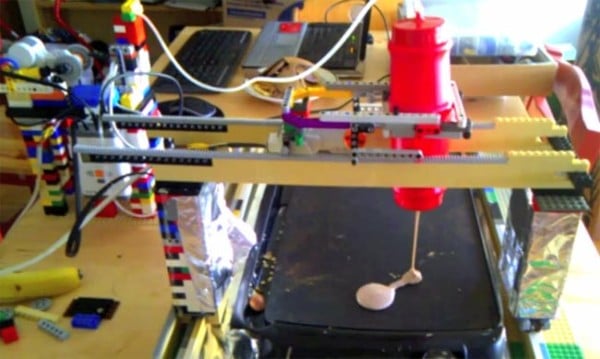 You can pre-program what shape you’d like your pancakes to be before the Lego-bot starts a-cooking.

This pancake-cooking bot is actually a 3-axis CNC-made robot that makes use of the Z coordinate as its Pancake Batter Dispenser Control. Here’s a video of the bot in action:

They aren’t being made commercially, but you can give making one yourself a go by following the directions Mexican Viking use to create the one above.

[via Geeky Gadgets via Slippery Brick]