The guys at the ETH – the Swiss Federal Institute of Technology have the best jobs on the planet. Not only do they get to play with flying quadrocopters all the time, and have built a special arena just for doing so, they’ve now got them flying using gesture control. 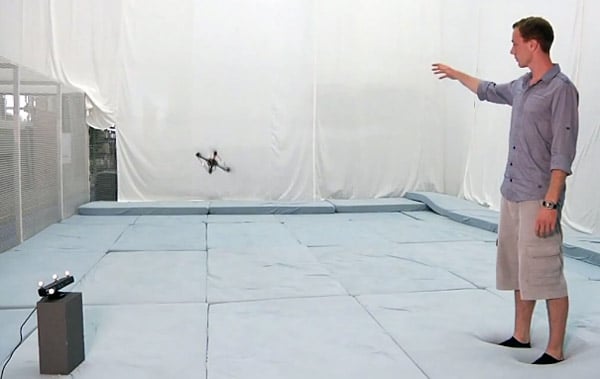 By interfacing their already cool flying machines with a Microsoft Kinect rig, they’re able to pilot the quadrotor with simple arm gestures. The pilot can point in the direction they want the quadrotor to fly with their right arm. Left-arm movement causes the flying craft to do a flip. And if you stop pointing, it just hovers wherever you last instructed it to go. Here, see what I mean:

I’ve seen a similar AR:Drone/Kinect hack before, but the control mechanics here seem much more intuitive. Hopefully someone will get this same thing worked out with the AR:Drone so we could try the same thing at home.