I love cool digital clocks, and I have to say that this one is one of the better ones I’ve seen in some time. Instead of telling time with LEDs, LCDs, or mechanical hands of some sort, this clock tells time through changes in temperature. 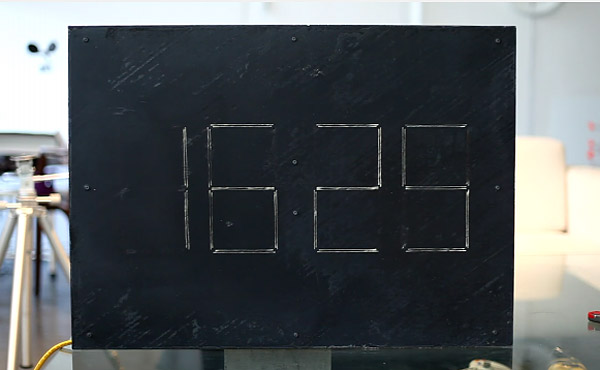 Created by Che-Wei Wang and Taylor Levy of CW&T, the Thermochromic Clock was made by taking segments of nichrome wire, covered with black heat-sensitive paint. When power is applied to the wires, they heat up slightly, making the wire transparent so you can see the time against the dark background. As each segment cools back off, it fades into blackness once again. The clock can also be reset to its default state by wiping it down with a cool cloth, as seen at the beginning of the video clip below:

The 4-digit, 7-segment timer circuit is controlled by an Arduino, but they don’t reveal anything else about how you might be able to create one of these for yourself. It does make me think that you could make a really cool clock using some sort of heater wire filament placed under glass, and letting it glow to tell time.