Some engineering students at Stanford get to take a class that might be the coolest class ever called Experimental Robotics. Being the geeks they are, some of the students opted to build a robot arm that could have a lightsaber fight with you using foam lightsabers. The bot was dubbed JediBot. 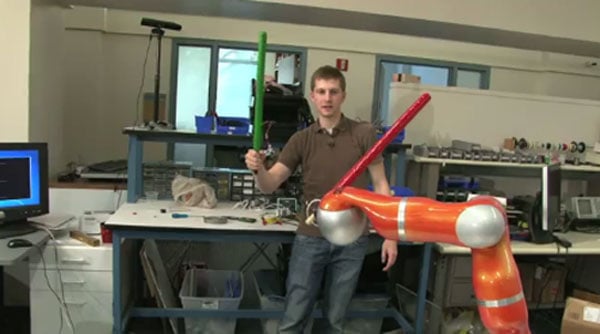 The robot makes an attack (slowly), and when the person fighting counters the attack it stops and resets for another attack. The JediBot doesn’t move nearly as fast as those Yaskawa Industrial bots that we saw fight each other with lightsabers before. This time though at least you can get in on the dueling action. You can check out the video to see just how slow the JediBot is.

Other students in the class created a burger-cooking bot and a robot that can play golf, but the JediBot is certainly the coolest of them all.