Everyone I know thinks that since I write about technology and review a lot of stuff, that I have a boatload of gadgets sitting around that I was given for free. That isn’t true, as almost everything a geek reviewer might want to keep actually has to go back and the stuff that you end up with tends to be the piles of cheap little crap not worth the cost of mailing back for the maker. One geek blogger has figured out a way to get some swag by camping out for the iPhone 5. 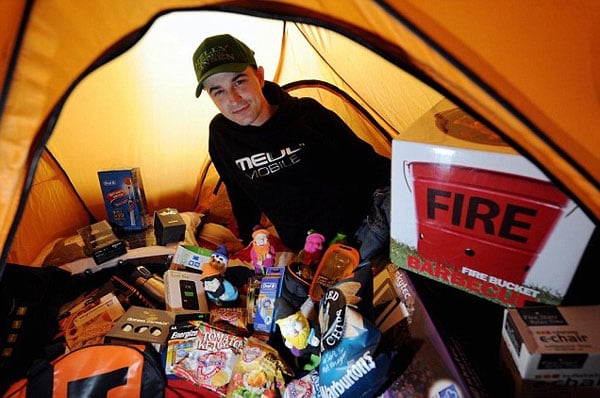 The dude is a former trash collector that lives in London named Rob Shoesmith. He is camped in front of the London flagship Apple Store and is staying in a tent. So far, he has been given about £40,000 worth of food and gear. The biggest item was a £20,000 car from Chevy.

The campout is part of a marketing trick for the guy’s website. He has vowed to donate anything reusable to charity. He quit being a binman as the Brits call garbage collectors three weeks ago, and now works in marketing for a company called Medl Mobile. The look on the guy’s face in the photo here says, “Come to me free stuff.”