One of the things that my childhood mind always wanted to know was how you go to the bathroom in outer space. Not to be rude or anything, but it always really sucked when you were dropping one off and accidentally pinched it off too early. You could burn through a whole roll of paper trying to clean up that mess. I know I’m not the only one that had to do the walk of shame at some point when you run out of paper. 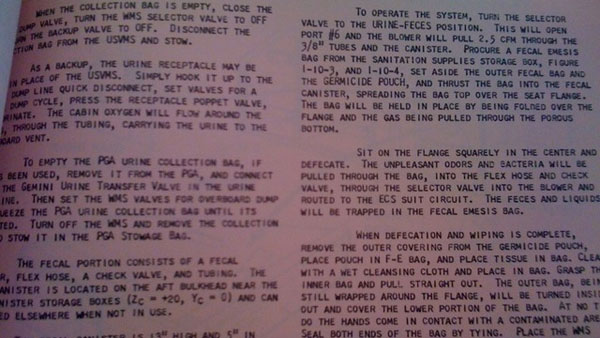 I can only imagine the anxiety an astronaut might have in space when the walk of shame is from the moon to Earth. A NASA manual from back in the days of missions to the moon has been posted up and it makes the act of dropping a load something that is far more complex than here on Earth. It involves blower motors, bags, setting a “selector valve to the URINE-FECES position,” sitting on a flange, and all sorts of other unpleasant stuff. Apparently, when you’re all done, you wipe with a germicidal wipe and bag up the mess.

I never really thought about what would happen to a fart in a small enclosed capsule. Not only would it stink, but if it’s loaded with methane gas, you could actually blow yourself up if you’re not careful. That would really suck.