I recently stumbled upon a photo album on Facebook about a whole bunch of kids from the University I went to planking all over the campus. The planking photos were amusing, to say the least, and I wasted around a half hour browsing through the entire album.

One of the photos showed a student planking on a canteen table with a school guard looking on in disapproval in the background. Gamestop apparently frowns in disapproval at planking as well, because word has spread that they’ve just fired an employee caught planking in one of their stores. 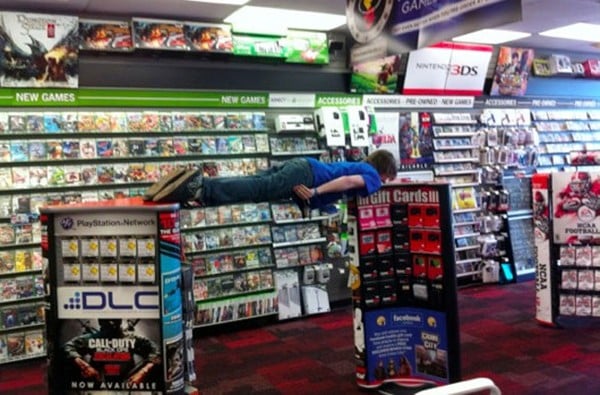 John Mazzocchi must have been pretty bored at work because he decided to plank right there at the store, had someone take a photo, and posted it on Twitter with the following Tweet: When I go #planking I go hardcore..

Someone from management probably saw him plank in real life or got wind of it via Twitter, because he got fired, and so did his colleague who took the photo.

Mazzocchi had been working at Gamestop for around 5 years, which translates to a pretty long time in the retail world. He seems to be fine about the whole firing situation though, because he’s been tweeting jokes about being the first person getting fired for planking.

[via TFTS via Geeky Gadgets]