Despite the fact that having gadgets made in China already is one of the most economical ways to produce technology at scale, the nation is constantly thinking of new ways to make it even cheaper and more scalable to produce goods.

Terry Gou, Chairman of China’s Foxconn recently revealed that they will be rolling out a veritable army of robots over the next three years, many of which will replace human positions. The move is meant to cut down on labor costs, but to also improve overall productivity, with robots taking on basic tasks like spraying paints or adhesives, welding and assembling parts. 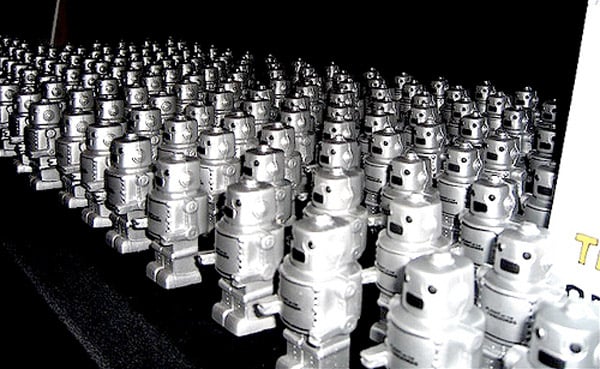 According to China’s Xinhua News, Foxconn currently has only about 10,000 robotic workers, alongside 1.2 million human employees. While they haven’t said said how many humans will be replaced with robots, you can only imagine that 1 million ‘bots will make a dent in the payroll. On the plus side, robots generally don’t commit suicide. On the down side, they do like to kill things.

In a related story, SkyNet will be coming online in 3 years, slightly delayed from it’s original timeline.

[via AllThingsD via Adafruit Blog]