There’s already tons of officially-licensed Angry Birds merchandise flooding the market these days, but I’m going to go out on a limb and bet that this is not official merch sanctioned by the game’s creators. 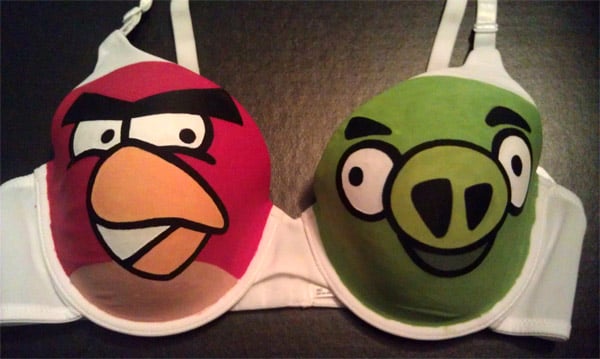 This Angry Birds brazier by SceeneSchoes features a red bird on one cup, and a green piggy on the other. Clearly the bird boob is ready to attack the piggy boob – as is clear from the look of determination on its face.

Ready to don this sexy lingerie for your geeky sweetie? Head on over to Etsy, where you can find the Angry Birds bra for $35 (USD). It’s available in sizes from 34A to 38DD for small, medium and large birds. And despite any temptation you may have, I do not advise using this as a slingshot for launching birds.

[via sogeekchic via Fashionably Geek]