It’s been a while since I went down over to the local arcade, but I went crazy with the racing games the last time I was there. I’m a really bad driver, so crashing and veering off the road without any real consequences was a welcome change for me.

But more than that, I was really impressed with how much racing games have evolved to more interactive games. For example, the seat moved with each turn I made, and the whole chair would vibrate or lurch forward whenever I crashed into something (which happened pretty often.) 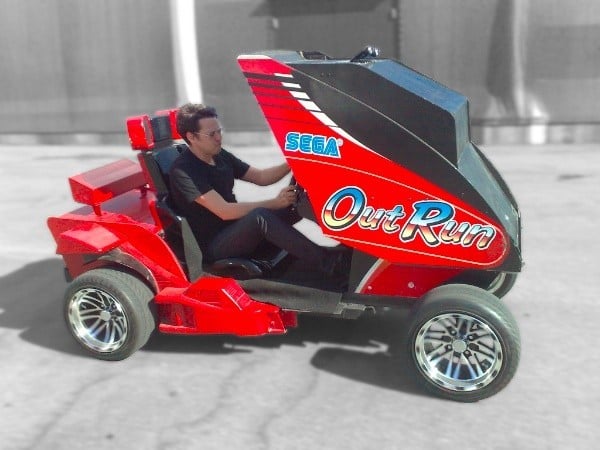 However, the OutRun AR project is totally in a league of its own, because it’s basically a video game that has been brought into the real world. This project of Garnet Hertz’s first made waves in 2009, and after a couple of years, he’s finally done with it.

Hertz, an informatics researcher from the University of California Irvin, made OutRun IRL a reality by incorporating the classic driving game into an electric golf cart that has been fitted with cameras and custom software that can roughly render what’s actually in front of you in using retro-style arcade graphics.

For the future, Hertz and his fellow researchers hope that their technology could somehow be used to create AR-based wheelchairs to help the disable and maybe even develop some video game-based therapy and remedies for disabled gamers.

[via Nowhere Else (FR) via Engadget]