WIMM Platform Wants Us to Carry a Gadget at All Times

We already have our laptops, tablets and phones, but a new company called WIMM Labs thinks there’s room in our daily lives for another, even smaller gadget. WIMM Labs has developed the WIMM platform, a combination of hardware and software tools designed to create wearable or highly portable communications devices. 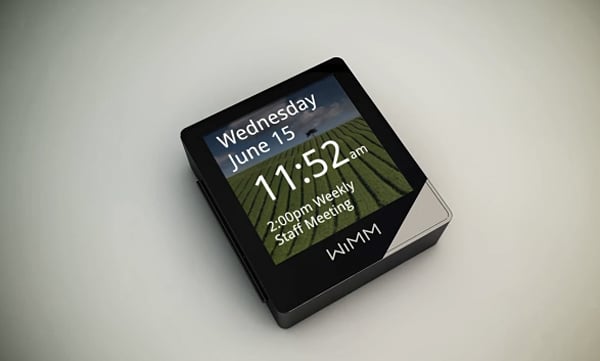 At first glance, the hardware component – called the WIMM module – looks like a glorified wristwatch, but WIMM Labs promises that it can do much more. The module’s OS is based on Android, which should make it easier for developers to make what WIMM Labs is calling “micro-apps”, programs that will run on the device. It also has Bluetooth and Wi-Fi connectivity, a touchscreen, an accelerometer and magnetometer and the ability to emit vibrations and sounds. WIMM Labs also says that the module can have a maximum of 32GB of memory. The company hasn’t given specifics on the module’s CPU though.

WIMM Labs envisions a wide range of products based on their platform, from a wearable organizer to a health monitor and a mobile payment device. Here’s WIMM Labs’ VP of Product Marketing Tim Twedahl with a quick demo of the WIMM platform, courtesy of CNET TV:

And where there’s a gadget, there’s Facebook. Shown below is an early build – remember that before you judge the device! – of a Facebook micro-app running on a WIMM module:

I may just be short-sighted, but none of the current concepts would compel me to buy a WIMM-based device. Then again, the module measures only 1.3″ x 1.4″ x 0.5″ and weighs just 0.77 ounces, so there will be places that the device can go that today’s smartphones can’t, and it seems to be more powerful than media players of comparable size and weight.

I guess we’ll just have to wait and see what developers can do with the device. Maybe modders and hackers can use it in innovative ways like they’re doing with the Kinect. Check out WIMM Labs’ website for more info.