There have been tons of attempts to use the Kinect to create 3D images, but leave it to Microsoft themselves to come up with the most impressive 3D modeling system I’ve seen to date. 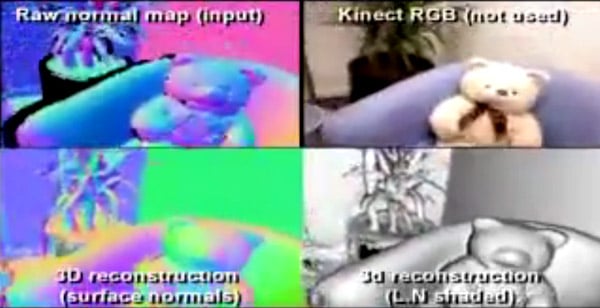 Not only can it capture scenes in three dimensions, it can capture and re-render them in real time. I can talk about it all day long, but you’ll want to check out this silent, but awesome video showcased at SIGGRAPH 2011 to see how cool it really is.

As the Kinect camera makes its way through a scene, it automatically addes and removes depth information as needed, and uses GPU-based camera tracking and surface reconstruction techniques to create the 3D model. The software continually improves and refines the 3D image as it goes too.

KinectFusion technology can even allow for multitouch interactions on arbitrary surfaces, and inject virtual 3D objects into real-world scenes being rendered in real-time.

It’s pretty incredible stuff, and I’m hopeful this technology will make it into the video game world at some point in the future.