Ready for the creepiest three minute cooking show ever? No, I’m not talking about Rachael Ray and Alton Brown getting freaky with cake mix and Jell-O. I’m talking about BakeBot. It’s Willow Garage’s PR2 robot in the kitchen. 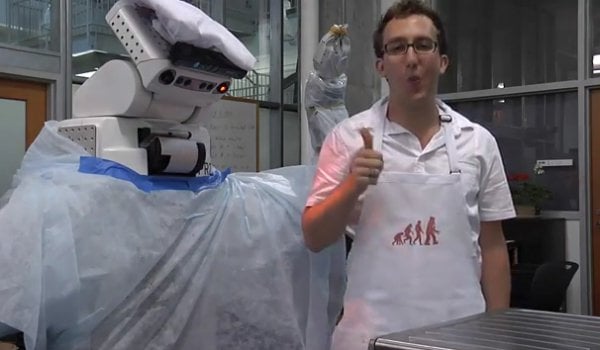 The robot’s goal is to make a single large cookie. And the bot is all decked out in protective plastics as well as the table. If PR2 did this himself, then I’m a little concerned, because he is basically on his way to learning how to prepare a kill-room. His skills as he works over the protective surface are also very Dexter-like.

Notice how he savagely stabs and then mixes the concoction. We are talking expert precision, with bursts of finely tuned rage. I’m surprised he doesn’t have photographs of other foods on the wall nearby that he uses to taunt his current dish.

Once he mixes it all up he dumps the huge gob of “I ain’t eatin’ what that robot’s cookin'” into a pan and heads for the toaster oven where he cooks it all up.

When it comes out of the oven, I don’t know what the hell that is, but it isn’t a cookie like I’ve ever seen. It looks like meat for god’s sake. Then he makes some poor human taste test it. The guy gives it a thumbs up, but BakeBot is standing right there so, I don’t blame him for lying.