Oh hey folks. Didn’t see you there. I was just admiring this article’s title. But on to the topic at hand: floating fish! Air Swimmers are remote-controlled, inflatable nylon balloons. Fill them up with helium, fire up the remote control and let ’em swim through the air. 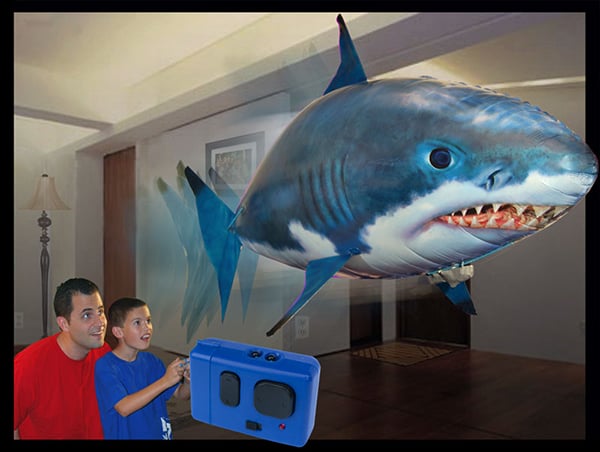 Currently, Air Swimmers come in two varieties – a clownfish and a shark. Both versions are 57″ long and 36″ high. An infra-red remote control lets you control the height and direction of its flight, but since it’s also a balloon it will float lazily on its own. Make sure you stay within 40 feet, so it’ll still respond to your whims.

The Air Swimmers seem to be such a hit that the manufacturer’s main store has been overloaded. Fortunately if you can’t get through there, you can order Air Swimmers at another store. M&M Toy Store is selling them for $40 (USD) apiece, or $72 for a combo pack. Unfortunately the shark version is out of stock. No surprise there. Here’s a tip to MWC: yes, customers want a billion varieties of Air Swimmers. All of which should be sharks. A life-sized blue whale would also be a hit.