Kids learn things quicker when they can see them visually. That’s probably true of most adults too. So if you want to teach kids about recycling, it makes sense that you would want to wow them with a demonstration. A robot will do the trick every time. 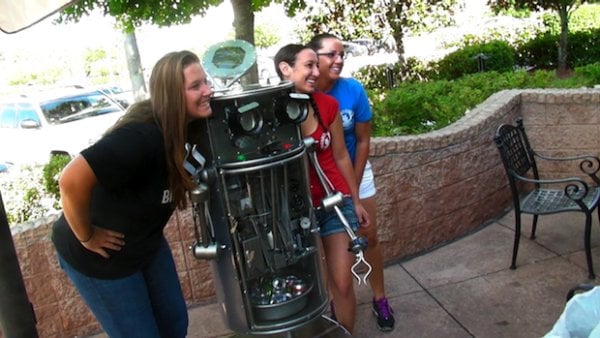 Most kids just see the soda can hit the bin and get taken away by the garbage man, but what happens after that? Dr. R.E. Cycler is here to explain just that. The R.E. stands for “robotic environmentalist”. Basically a child puts a can into this solar-powered bot and gets to watch it being crushed.

So now your kid knows – and as the GI Joe cartoons used to say, “knowing is half the battle.” Now your child can rest easy and not toss and turn all night worried about the recycling. Apparently this is a large problem. I hope they don’t get any ulcers.

The bot was designed by Florida Robotics and built in May 2011. The idea is to get kids excited about recycling. I get that. But so what? A can is crushed. If your kid doesn’t know that cans are crushed and you can’t tell him or her, now we have to build a robot to do it in a demo. To crush a can!

Half these kids have probably seen their drunk uncle or frat-boy brothers crush cans on their head. Show a bot doing that! Drink it down and crush that thing into oblivion on it’s hard robot head. That might be interesting. It might even be a good new robot sport. Which bot can crush a can into the thinnest density?

But this bot? Even with the charming Furby-like voice, kids are going to forget this the minute after they see it and go back to their games and Facebook pages. Then they’ll grow up to be good little accountants or something, instead of a friend to robotics and the environment. All because this bot is lame and they could have been exposed to something much cooler.

Meh. Maybe I’m just grumpy, but I want kids to get excited about robots and science.