Portal 2 Proposal: The Wedding Cake is Not a Lie

Who doesn’t love a good romantic story – especially when it involves Portal? Well, you can have your cake and eat it too, thanks to this tale of a guy and his very special Portal 2 proposal.

A guy named Gary Hudston wanted to do something very special to ask his girlfriend, Stephanie, for her hand in marriage. Instead of doing the “on bended knee” thing, he got creative. He sought out a game level designer to help him put together a wedding proposal, buried deep inside a set of custom Portal 2 puzzles. 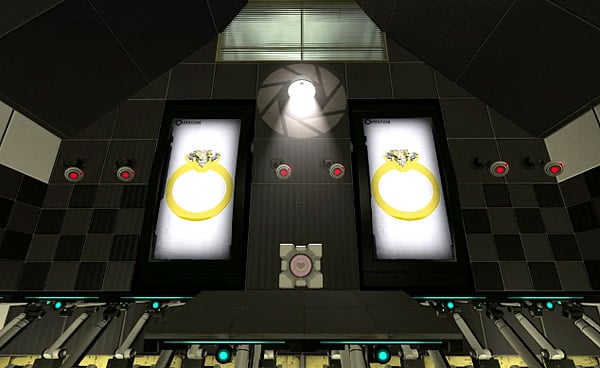 What he got was much more than he could have imagined. Thanks to the talents of Douglas “TopHATTwaffle” Hoogland and Rachel “Miss Stabby” van der Meer, he ended up not only with an awesome proposal for his soon-to-be fiance, but some equivalently awesome and dastardly Portal 2 gameplay. The entire thing is captured in this video clip:

Wasn’t that amazing? I can’t believe they even got Ellen McClain to do the voice of GLaDoS. Although, now I want to marry GLaDoS. If you want to try the levels out for yourself, you can download them here.

Stephanie, you have to marry Gary. You’d be a fool not to. That is, assuming you managed to get through all of the levels to the proposal stage.