Intel 8080 and Gameboy Emulators in Garry’s Mod: Play Games on Your Computer in Computers Built Inside a Game

Facepunch members Technicolour and Divran are working on making Yo Dawg video game moments possible in the popular Source-based sandbox “game” Garry’s Mod. The two coders have managed to make an emulator of the Intel 8080 8-bit microprocessor. They then used it to play Space Invaders, while playing Garry’s Mod: 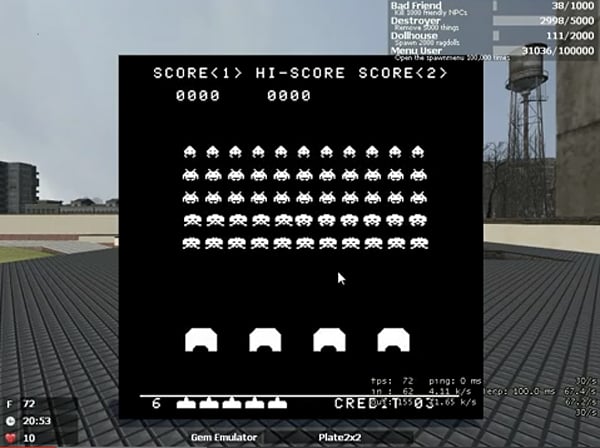 Here’s the emulator in action:

But Technicolour and Divran are not stopping there: 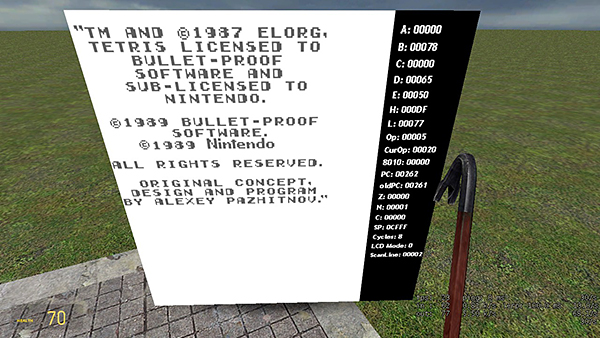 Yep. That’s Tetris running (or at least starting up) on a Gameboy emulator, inside Garry’s Mod. While Technicolour and Divran still have a lot of work ahead of them before they can do one better than these guys and actually play Pokémon in Garry’s Mod, they’re dreaming big: “Short term the intention is to merely get the emulator’s compatibility up, long term we hope to use a system of sending keypresses between players to allow people to watch each other play in Multiplayer…” and eventually “perhaps even (emulate a) link cable so you can trade your pokemons. Once we have these features in place we’ll be exploring Gameboy colour.”

When the hardware catches up I wouldn’t be surprised if someone managed to make Garry’s Mod run within Garry’s Mod. And then that will be the end of our universe. Or maybe we’re already running in an emulator. Those invaders were none the wiser.