We all know TRONguy. That geek that wears the custom made spandex TRON suit even though he has no business being in anything that tight. Well that dude has been drafted by the Duck Tape company that sells all sorts of tape products including duct tape for a new commercial. This may well be the best geek commercial ever. 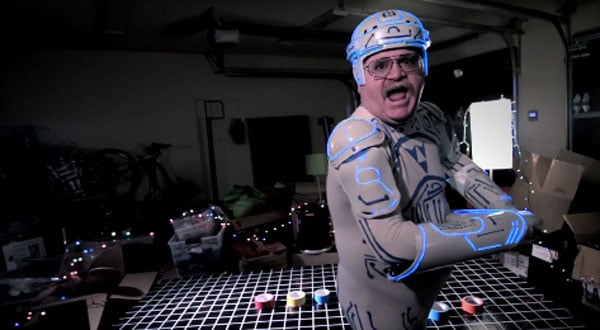 The commercial is embedded below if you want to see it and skip the boring description, but for those of you who’d rather read about it, the commercial starts out with three rolls of blue Duck Tape on one side and some orange rolls on the other. The tape takes off trailing the sticky stuff behind it like the lightcycle trails in the TRON flicks.

Just before the blue rolls are about to kill the orange, a hot blonde (too good looking to be TRONguy’s wife) breaks into the scene. She yells that she told the TRONguy to clean the garage and to stop playing. The camera then shows TRONguy sitting there playing with the tape. He hops up and tosses his disc (otherwise known as a Frisbee) at her and the commercial is over.