Most of the bipedal robots I’ve seen over the years are pretty pokey. But this robot can run at a peak speed of 6.8 MPH, which is definitely about the point where I fall down and go flying onto the floor on the treadmill. 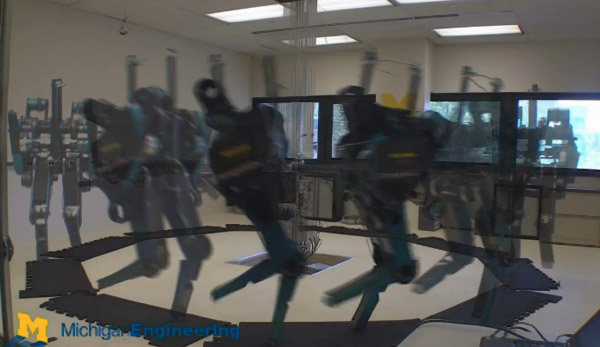 But MABEL the robot can tear around at those speeds, thanks to her human-like leg and knee structure. MABEL was created by Johnathan Hurst of Oregon State University, and the running tests were performed by professor Jessy Grizzle and a team from the University of Michigan and Carnegie Mellon. While MABEL’s peak speed is 6.8mph, her average speed is about 4.4mph, which is still pretty fast for a robot in my book. Plus, she lifts her feet about 3 to 4 inches into the air when she runs.

Let’s cut to the chase and watch MABEL in action:

Boy, that’s pretty amazing stuff there, Maynard. But I have to say that MABEL sort of gives me the creeps. Not only is that noise she makes as she runs enough to make me think I’m being chased by an army T-800s, I’ve been pretty freaked out by disembodied robot legs ever since Herbie Hancock’s Rockit music video.

[via Futurity via Holy Kaw]