We’ve featured a variet of the insane slingshot-style weapons created by Joerg Sprave before, but this one wins the record for the most powerful and largest slingshot I’ve ever seen.

This 10 foot-long beast can fire a 3-inch steel ball over 650 feet through the air. 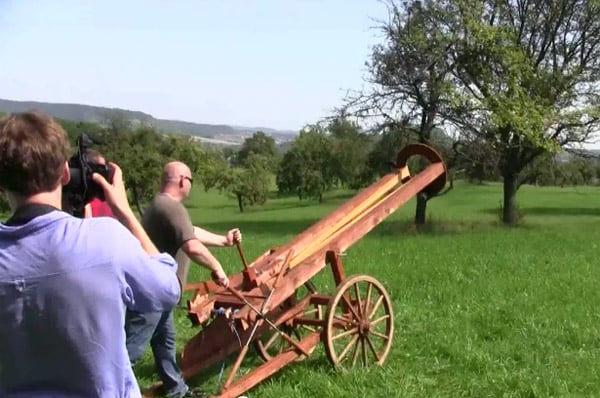 Instead of using gunpowder to launch its deadly projectile, this cannon gets its power by stretching 24 Thera Band Gold exercise bands, locked into launch mode using a winch mechanism. I, for one, would not want to see what happens if one of those bands ever snapped. I have enough problems when a rubber band snaps back against my hand.

This thing is just about as destructive as you’d imagine it would be, making mincemeat of an old car they fire their steel balls at. Check it out in the video below:

I especially enjoyed part is where they use the force of the ball to close the hood and door of the car. Well, “close” is a bit of an understatement.