We may not have impossibly thin phones with holographic displays just yet, but we still live in pretty modern times. Just take a look at one of Nikon’s newest digital cameras, the Coolpix S1200pj. Aside from the usual picture- and video-taking features, the S1200pj also has a built-in LED projector. What’s more, the projector can be used to display not only the media stored in the camera itself but from Apple’s iOS devices as well. 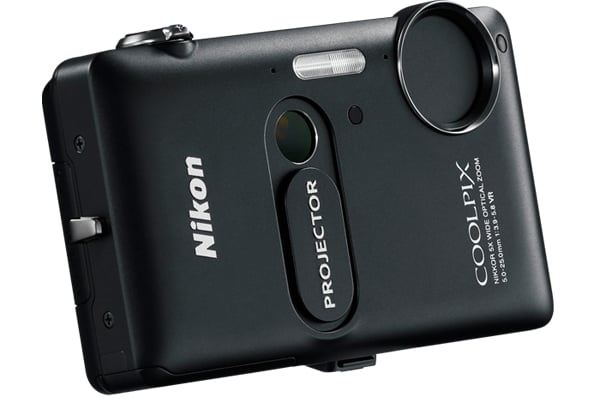 This is actually Nikon’s third camera to have a built-in projector, but the difference with their latest effort is that the S1200pj uses DLP technology, giving it a brighter output while at the same time consuming less power. The projector has a 13mm/f2.1 lens with a 20 lumen light source composed of one red, one green and one blue LED. It can display images up to 60″ in size at distances of up to 10′.

As you might have expected, even with the improved technology the S1200pj’s projector is still power hungry. It will drain the camera’s Li-ion battery within an hour of use, so it’s not a permanent alternative to the built-in 3″ LCD screen. Here’s a commercial for the Coolpix S1200pj:

As you saw in the video, iOS devices connect to the S1200pj by way of a 30-pin connector to 3.5mm cable. Engadget says that Nikon will bundle the cable with the camera for at least the first three months after its release, so I guess late adopters will have to cough up extra to buy the cable separately. The camera’s other connectivity options are a digital A/V, VGA and USB port. The camera also has a slot for SD, SDHC and SDXC memory cards. Here’s Engadget’s hands-on with the camera:

The Nikon Coolpix S1200pj is available for pre-order on Amazon for $429 (USD). I only talked about the projector since it’s the defining feature of the S1200pj, but no one’s going to buy this for that feature alone. Check out Nikon’s website for the camera’s full specifications.

[via TUAW and Engadget]