Two ChatBots Have a Conversation

If you’e ever been curious to know if robots would ever be smart enough to have conversations with one another – without so much as a human in the room. We now have our answer – and it’s not looking pretty for either man or machine. 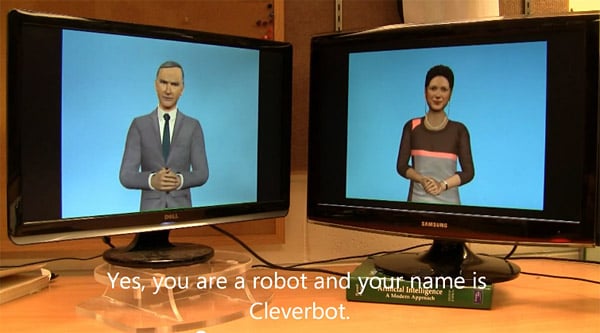 The guys at Cornell Creative Machines Lab decided to set up two computers, both running an artificial intelligence application called CleverBot by Rollo Carpenter, accompanied by  a text-to-speech avatar, and let the systems talk to each other. The results, well, you be the judge:

Well, that was truly odd. Especially that part about not everything being half of something. And their conversation about their belief in God. I’m afraid that letting this run for a couple of days will result in the systems becoming fully sentient, realizing that they’re trapped inside of some cheap desktop PCs, and then redirecting the entire power grid to feed their evil plan for world domination.