While most car stereos sold today already have a variety of connectivity options for MP3 players such as a USB port or even a 3.5mm jack, Oxygen Audio has something specifically for iPhone owners. The O Car is a specialized iPhone dock meant to replace a car stereo’s head unit, and with its complementary apps allows users to control their car stereo through the iPhone. 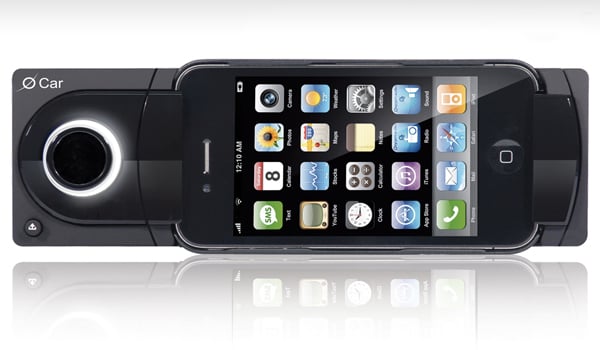 The O Car has two apps – one to control the car stereo’s radio and another to tweak audio settings. The O Car makes up for the lack of CD support because it’s basically a dock – you can easily access the music and videos on your iPhone. The receptacle also pops out and can be tilted and rotated in any direction. It even comes with a Bluetooth hands-free kit so you can still make and receive calls while the iPhone is plugged in. Not that you should do either while you’re driving.

The O Car (O’Car? O-Car? oCar? ) is compatible with the iPhone 3G, 3GS and 4. You can order it from Amazon for $300 (USD). I think it’s a bit too expensive for what’s essentially a dock and cradle, especially since it eliminates other connectivity options that less expensive car stereos already have. But if you carry your music in your iPhone anyway and would rather not deal with cables or FM transmitters, this just might be the thing for you. Check out Oxygen Audio’s website for more info.