A lot of lives (some human, mostly animal) have been sacrificed in the name of science and medicine. It’s hard to completely understand how some biological organisms function or how some processes work because scientists can’t just go ahead and cut something (or someone) up to do so. 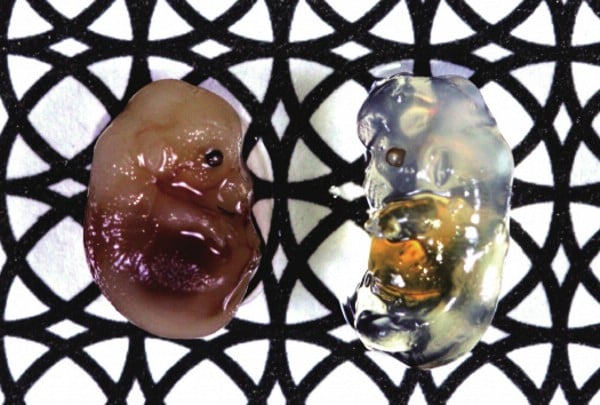 So what several Japanese scientists from the RIKEN Brain Science Institute did instead was develop a chemical reagent that could turn biological tissues transparent. The photo above is not of a human embryo (because not only is it unethical, it’s also illegal, but the thought still crossed my mind all the same), but of a mouse embryo.

The reagent is called Scale (with an italicized “l”, as you can see) and was developed by Atsushi Miyawaki and his team at RIKEN. Scale can turn any tissue transparent, without causing any major alternations or changes in the overall shape or proportion of the sample. While Scale is definitely the most advanced of its kind, it still has a long way to go. The reagent can be used on living tissue; however, it quickly turns the tissue from living to non-living because of its nature.

Miyawaki explains that Scale was primarily intended for conducting research on the brain of mice, but that he and his team hope to improve the reagent more to extend its application to heart, muscle, and kidney tissues–not only of rodents, but also to human and primate tissues in the future.

[via PopSci via Dvice]