It’s always annoying when you have to go (go as in poop or pee, not go as in, to leave) and find that there’s no vacant toilet nearby. You can run and search the immediate vicinity, but chances are, the bathroom will almost always be occupied (especially in times when you most need it.) 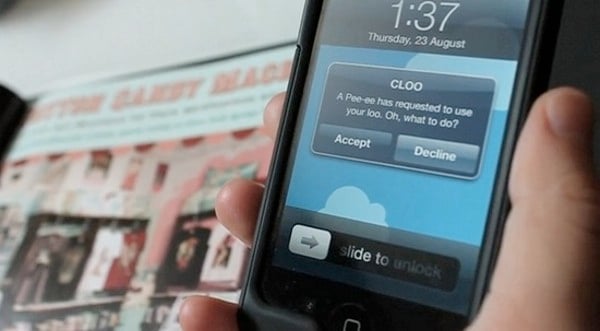 So what did some clever people come up with? CLOO. No, it’s not some portable toilet or anything of that sort. Rather, it’s an app for your smartphone that will sort of work like a geo-targeted social network for toilets. It connects people who: 1) have a vacant toilet and 2) need to go urgently.

That means CLOO is working on the concept that some people will allow total strangers to pee or take a dump in their bathroom for a couple of dollars.

Some people have expressed disgust at the concept, which I understand, because really, you’ll basically be opening your door to complete strangers who could have other intentions than just using your toilet. Nonetheless, good try though, CLOO crew.