Just like the ironically good and smart folks at Evil Mad Scientist Labs, custom gamepad maker Evil Controllers isn’t living up to its name. The company teamed up with The Able Gamers Foundation to create the Adroit Switchblade, a controller designed to be used by gamers with a limited range of motion. The controller’s two thumbsticks are on separate blocks and have long wires, so they can be used in a variety of configurations and positions. But it’s the port-laden box that offers the most customization. 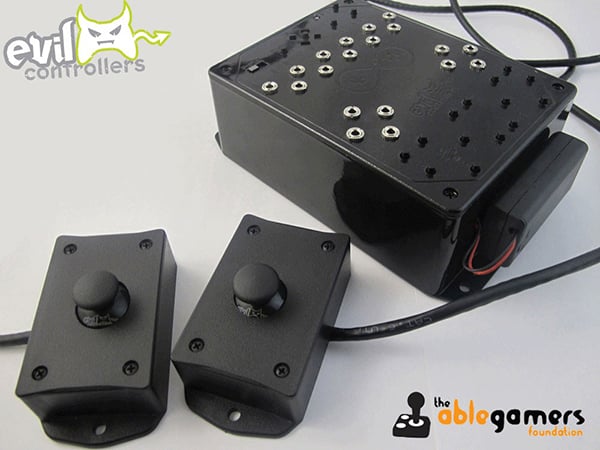 Those jacks are meant to be used with a variety of specialized switches that make it easier for disabled gamers to control computers or assistive devices. Once a switch is plugged in, it can be mapped to any button on an ordinary controller. A switch can even be mapped as multiple buttons, to toggle rapid fire or emulate a button held down. It’s also possible to save different configurations as profiles and then map a switch to change profiles. For example, run, jump and duck can be set to one switch. When the user activates the profile switcher, the switch’s mapping can then be changed instantly. One second the switch is for running, the next it’s for jumping, etc.

By default, the black buttons on the bottom of the Adroit Switchblade box are mapped to the Xbox 360 controller, but AbleGamers says that the controller can also work with a PC or a PS3 using an adapter. I’m not doing this product justice as this is all new to me, since I didn’t even know about the switches or the existence of alternative controller up until I saw this product. Here’s Mark Barlet, President and CEO of The AbleGamers Foundation with a better explanation of the Adroit Switchblade:

The only thing that’s not so good about the controller is it’s price. Evil Controllers is selling the Adroit Switchblade for $400 (USD). That’s quite expensive, but as Barlet mentioned in the video, alternative controllers often cost more than a thousand dollars. Steve Spohn of Able Gamers also mentioned that the foundation and Evil Controllers are still working on “several future designs”, so maybe someday they’ll be able to come up with something cheaper.