I’ve been holding back on purchasing Deus Ex: Human Revolution because I still have other games I’ve yet to finish – Radiant Historia! – but if you’re one of the voracious types who’s already finished the game three times, check out this slick mod by Eidos forum member gibbed. Called the Burger Menu, the mod inserts a debug menu that’s accessible in game via the pause menu, giving you access to all sorts of tweak to make the game easier, harder or just make the experience of playing it fresher. Of course it’s for PC only, so folks like me who only have consoles, look on in envy. 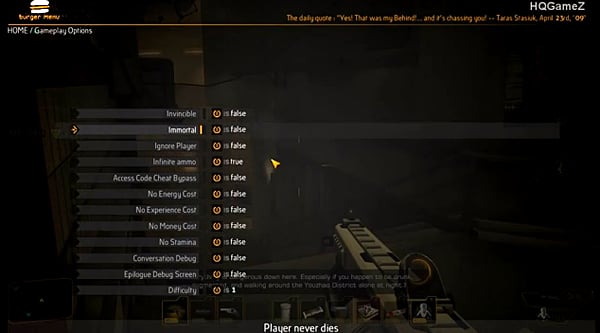 Some of the tweaks that can be activated from the debug menu are invincibility, infinite ammo and infinite power. Aside from that, the menu also has a “shop” portion. I enclosed that in double quotes because you don’t actually have to pay to get stuff from the shop. In fact this shop can spawn money, along with weapons, augmentations and more.

But the benefits of the mod go beyond in-game power tweaks. It also removes the logos that appear when you fire up the game so you can start playing faster. The mod also inserts a mission selector from the game’s main menu, so you can immediately re-do levels with your new found powers or intentionally gimped abilities. Your choice. That’s what the game is supposed to be right? Wait don’t tell me! Shut up and check out the video below by YouTube channel HQGameZ to see more of the mod’s tweaks. It does have some minor spoilers though, so I didn’t watch all of it.

You can download the Burger Menu mod for free; check out this thread at the Eidos forums for the link and details. Again, this is only for the PC version of Deus Ex: Human Revolution, for builds up to 1.1.622.0.