Daleks are already fairly large. Just ask the Doctor. But this Dalek is on steroids. The Doctor might just think twice about challenging this one. 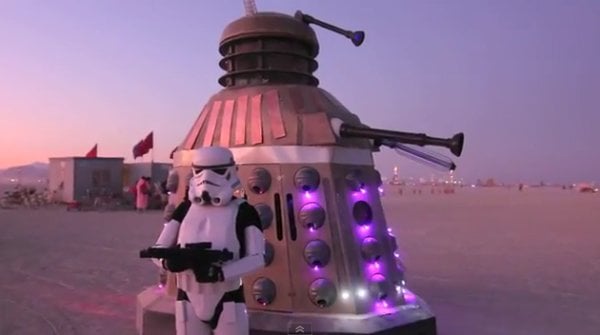 This Dominating Dalek of Destruction showed up at Burning Man this year and makes me glad that we don’t see more Daleks on the road. Or in the desert for that matter. Judging by the video, he’s a big hit with the ladies and he even made a Stormtrooper friend. When asked about it, the Stormtrooper admitted that, yes, this was the droid he was looking for.

The whole thing is very surreal and it kind of looks like Tatooine with a Dalek rolling around. At first I thought it was another George Lucas CGI addition to the new Blu-Rays. I just figured there was a Jawa riding around in that Dalek. Nope. Just humans being humans.