While the post office would probably question the noises coming from inside this cardboard box, I’d be pretty thrilled to receive this mechanical Mario game in the mail if someone wanted to ship me one. 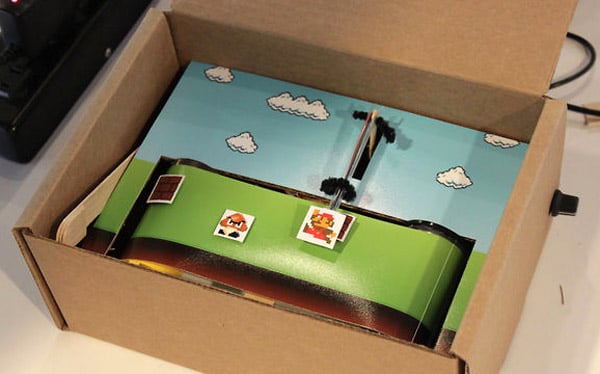 The side-scrolling Super Mario Bros. tribute was created by Adam Kumpf using the Teagueduino open source hardware platform, along with a few basic inputs and outputs. The game is controlled by the potentiometer on the side, allowing Mario to “jump” above and below the advancing obstacles on the belt below. Notice how it picks up speed the further you get into the level. Magnets behind each obstacle provide collision detection, and the box uses a servo to close if you bump into a baddie. No more game for you! Check it out in the video below to see it in action:

Ok, I know that Mario is running the wrong way, but dodging obstacles like that isn’t exactly how you play Super Mario Bros. anyway. It’s more like Spy Hunter. Just turn it on its side, change the icons, and add some bullets and oil slicks, and you do.  Still, it’s a pretty impressive little creation, and you can grab the source code for making your own over at the Teagueduino discussion forums.